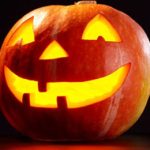 Halloween is celebrated on 31st October.
It was influenced by Celtic harvest festivals and its name comes from the old festival “All Hallows Eve”. This celebration has become famous all over Europe and it’s celebrated in different ways: there are a lot of fancy dress parties with ghosts, witches and vampires , traditional games like “Bobbing apples” and also lots of chants and rhymes.
The most famous legend of Halloween is “Jack O’Lantern”.
…Jack was a blacksmith and one day the Devil came to claim his soul . Jack didn’t want to loose his spirit, so he devised a plan to cheat the Devil. He was a clever man and his plan was successful, so the Devil never came back to him.
Many years later, Jack finally died. When he went to Heaven, he was denied entrance, because he had been so evil all his life. Then he went to Hell, but, as he had tricked the Devil, he wasn’t allowed to stay there either. Instead, the Devil sent Jack back to earth and gave him a burning coal as a light to guide him. Jack placed the piece of coal inside a turnip and his lantern became the symbol of a lost or damned soul.
To scare these souls away, on Halloween night people in Ireland carved or painted faces on turnips and placed them in windows or doorways. In America, Irish immigrants discovered that turnips were hard to find , so they started to make their lanterns out of pumpkins,  American fruits. 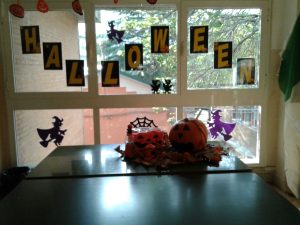 Our English corner at school